EASY offers sustainable archiving of research data and access to thousands of datasets.

EASY can be searched via a general free-text search. It searches in the metadata of all published datasets, but it does not extend into the contents of the uploaded files in datasets. Please use English as well as Dutch words for optimal search results.

A result list shows datasets that match the chosen criteria, mentioned in the 'Criteria' at the top of the list. Criteria may be removed individually using the 'x' mark beside them.
Sort options are also available; clicking toggles the sort order (ascending/descending).
On most result lists, refine options are available (at the right-hand side). Use those options to filter within the list (e.g. search within the result list).
For more about refining and the meaning of the values of the field 'Access', refer to the help on refine (use the '?' mark next to 'Refine').

To search specific fields (and/or any field), use the 'Advanced search' link.
To get a list of all published datasets, start with the 'Browse' link.

Search terms can be combined using ‘AND’,‘OR’ and ‘NOT’.

The scientific revolution of the 17th century was driven by countless discoveries in the observatory, at sea, in the workshop, in society at large and in the library. There was a dramatic increase in the amount of information, giving rise to new knowledge, theories and world images. The Dutch Republic played a key role in this information society avant la lettre. Its global trade network, its prosperity and its relative tolerance made the Republic a refuge for intellectuals from around Europe.

But how did the 17th-century scientific information system actually work? How were new elements of knowledge picked up, processed, disseminated and ultimately accepted in broad circles of the educated community? In short: how did knowledge circulate?

The 17th-century Republic offers an ideal case for exploring the answers to this question, and correspondence between scholars is the ideal research subject. That is because until the publication of the first scientific journals in the 1660s, letters were by far the most direct and important means of communication between intellectuals.

In order to answer the research question, a huge amount of such correspondence needs to be analyzed systematically. Traditional research methods are inadequate, and for that reason a consortium of universities, research institutes and cultural heritage institutions built a multidisciplinary collaboratory to analyze a machine-readable and growing corpus starting with, but not limited to, the approximately 20,000 letters of scholars who lived in the Dutch United Provinces during the 17th century.

The consortium is in the process of building the web-based tools to analyze and visualize the 17th-century epistolary networks and their themes of interest, and to enrich this corpus with annotations.

The collaboratory will not only contribute to our understanding of the circulation of knowledge in the 17th century, but also generate useful technologies for cross-disciplinary collaborations involving data-sharing and data enrichment in the Humanities.

As such, this web-based Humanities collaboratory on correspondences is a valuable prototype for possible future research collaborations focusing on large, heterogeneous datasets. 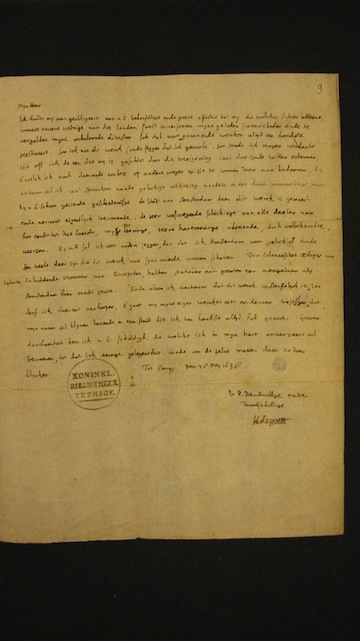